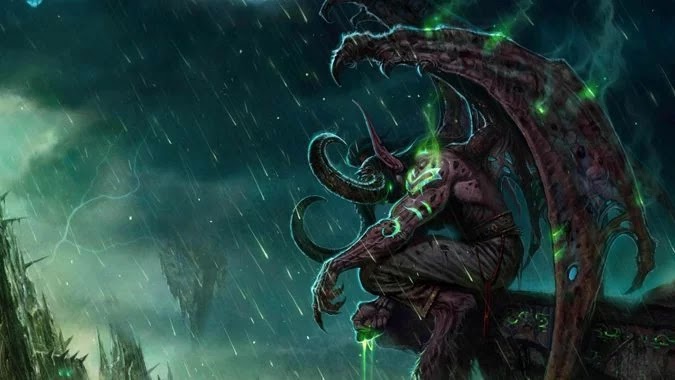 Illidan Stormrage is an iconic figure in the World of Warcraft series, he appeared to be the boss in the Black Temple in the Burning Crusade expansion, he is one of my favorite bosses in the game, he looks awesome, he is awesome, the story if Illidan the Betrayer is one that fascinated me, imprisoned by Maiev and the Wardens for ten thousand years he was released to defeat the burning legion, a group of demons who seek to destroy all worlds in the World of Warcraft game.
He was released from his prison to defeat them and save Outland from their selfish acts, during the release he sought alliances with the leader of the broken Akama who at the end of the expansion betrayed him, collaborating with Maiev for Illidan’s demise.
He would have to fight many of the burning legion’s leaders for keeping his homeland, even tho he is called the betrayer he is fighting for a righteous cause, the protection of his homeland Outland who the burning legion seek to destroy, the burning legion actually wants to destroy all worlds they encounter and Illidan was the only one who could defeat them, that’s why he was released from Maiev’s prison.
But the old warden didn’t give up on her revenge so she was seeking to capture Illidan again or defeat him. She was further imprisoned by Illidan but Akama released her and she sought vengeance upon him.
Illidan was later caught in the black temple encountering many enemies and many betrayals. He is seen as the bad guy in the expansion but I know that even in the villans you can find something good.
Blizzard Entertainment later released the Legion expansion which brought into the game demon hunters which resemble as much as death knights for Arthas the Lich King, it is a pretty original idea and people like it, I loved it. But what I didn’t love was that demon hunters had only two specializations at class and I didn’t understand why it wasn’t a third as the other classes did, but when do I venture further in the game maybe I will understand why.

I don’t usually play demon hunter class because of the handicap it has with the two specializations, I can’t accommodate with having less than others so I prefer playing something that is more normalized than everything else. Some day I will try to play a demon hunter and maybe max level it so I can experience the full potential of the class.